Today I received the first parts of my 3D-printed stern decoration. I was excited when I opened the package because this is by far the most complicated part I made. At the first glance I was disappointed because I thought the pillars are “melted” together at some places which would have meant that the space between them is to small. But the I realized that it was only recess wax from the production process which can easily be removed! Uff!
:Tired:
Now I am really happy with the quality of the parts! The picture below shows the parts still uncleaned on their support cage, which is necessary because they are really delicate! You can also see some of the recess wax on the lower pillar row on the left half. At the moment I am working on the equivalent parts for the side galleries. Once they are finished I will offer the complete set at Shapeways.
I hope can can get a better camera and take a clearer pricture….

I am really happy with the result and cannot wait to paint the parts and get them on my model. The next object on the agenda is the ship’s belfry… so stay tuned…. 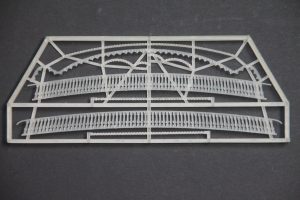 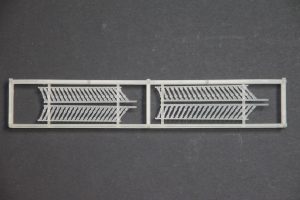 As I am still restricted to my small desk I took out the figurehead castings I bought from Caldercraft (which look and fit so much better than the original Panart parts, see here) and my tiniest brushes and did some filigree painting. Adding only one detail at a time I took 2 weeks to get it done. I am quite happy with the result which looks much better in real life than it does on the picture. That is something I realized often before: pictures exaggerate the smallest imperfection! Wait a second … may that mean that I could look better in real life that on all those pictures, too….  😎 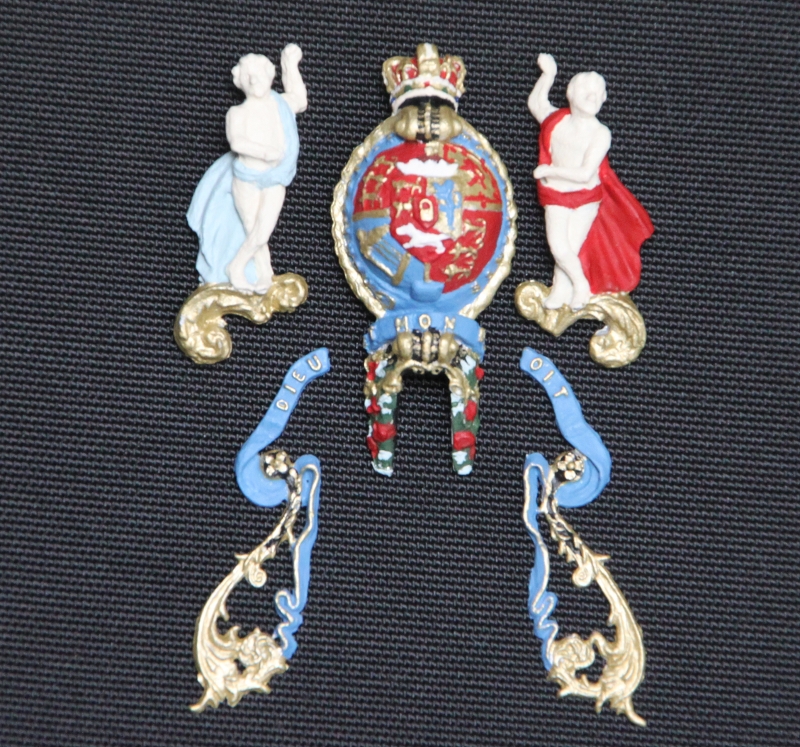 I had the opportunity to get some of my modelling stuff home from where I store it temporarily until I have a place to build again. I brought some parts which I intend to paint in the coming weeks/months, because that is something I can do on my small desk.
The first thing I painted is the beakhead decoration which is one of my 3D-printed parts. The next thing to come is the figurehead… but wait…. where are all my tiny brushes….  🙁 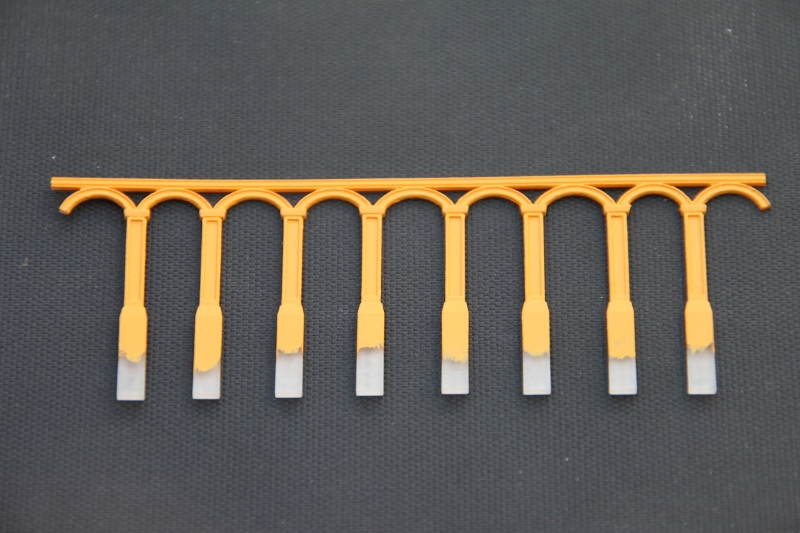 3D gallery decorations in the making

Though I am not able to build I was started designing 3D parts for the quarter galleries. They are not yet finished but I am well on my way. I used a scan of a 1:48 plan from my Arthur Bugler book and put it in the background to get started. I will have to test-print to see how the detail level emerges. Here are the first impressions

Whow!! When I computer modeled some parts for my own model for 3D printing, I never thought that someone (other that me) actually would buy these parts from Shapeways. Nervertheless I created a shop at Shapeways because it was just a few clicks to make the parts I uploaded for myself public.

But now someone really bought something!!!

I hope that person is happy with the parts and if so will spread the word…..

An example of a printed part, in that case the decoration for the beakhead: 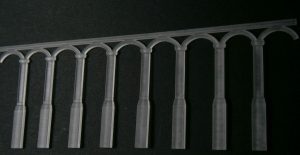 As you can see at the date it’s been a while since the last update. Two blog entries were lost and I did not have the nerve to redo them again…

!! Because of the same reason I moved house and for the time being I have no place to build.

But in 2011 I finished the second layer of planking along with the whales, planked the upper gun deck, painted the yellow-ocre/black scheme, installed some details on the upper gun deck, worked on the guns for this deck and tested the installation of a gun on a dummy. I also created some parts with 3D software and 3D-printed them on Shapeways. These parts are now free to buy for everyone (see “HMS Victory Scale Parts”)!! All that can be seen in the following pictures.

For now I will settle with some research on rigging…. It may take some time before I can go on with the build….

On to the pictures:

After finishing the first layer it is time to begin with the second. This time everything should be more precise because this is what will be seen later….

The top picture shows the gunports painted red and the first planks on the upper decks. You can see how the planks cut accross the gun ports at the aft part of the hull.

I had some fears not to get the gunports right because there is a litte framing step around most of them, which I thought would be hard to get straight and clean. But it is working much faster and easier than I thought. Even at the aft part of the ship where the planking is not parallel to the gunports and the clearance has to be cut at an angle. In the middle picture you can see one of the framed gun ports and the lower picture shows a strip of wood with the recess clearances for the gunports precisely cut out.

When I started planking I did not look close enough at the plans and did not recognize that the upper deck gunports at the waist do not have that framing step because they do not have lids. I had to insert tiny strips of wood to close the recess but after sanding and painting that mishap will barely be visible.

Today the first layer of planks was completed on the starboard side. The sharp bend at the stern was quite difficult but I am satisfied with the result. There are a few dents here and there but they will be fixed with wood filler once the port side is finished. After that I am confident to achieve a smooth surface for the second layer of planks. 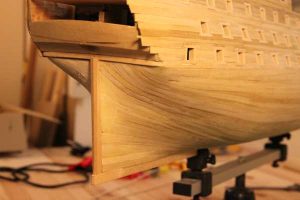 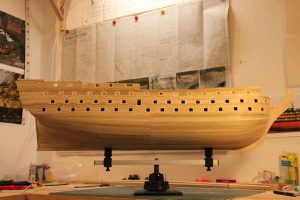 Completing the planking of the fore section

The fore half of the hull has been completely planked – well at least the first layer of planks.

I started with the starboard side and I learned quite a lot during that process. I applied that knowledge to the port side which resulted in an asymmetrical but much easier to achieve lay of the planks. As there will be another layer of planks that does not matter at all – the important thing is she shape of the hull and this is the same on both sides.

As you can see on the lower picture I started planking the aft half – not long before I can marvel at a massive, voluminous and bold hull…… 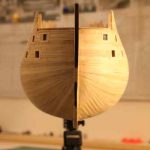